In Northern Ontario, this year, near one of the so-called "BEST PLACES in Ontario to Mountain Bike" (the ironically-named, "Killbear Provincial Park"), a home near a well-used multi-use trail, including mountain biking, was attacked by a bear, in Nobel, Ontario -- 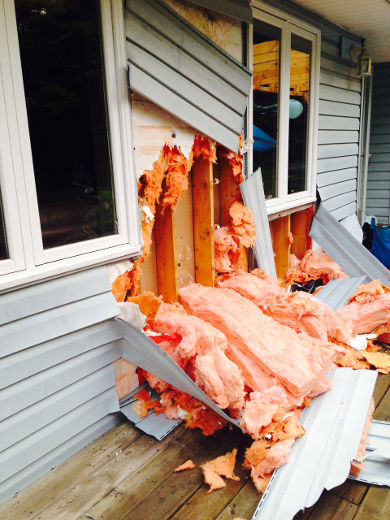 The nearby trail network connects to "Killbear Provincial Park". Wildlife becomes disturbed. Wildlife also follow "trails"...(and there are just too many mountain bike trails being built on our own North Shore mountains)

We have simply connected the dots, understanding the correlation between mountain biking activities, recreational development (mtbing trails), and the movement of disturbed black bears, years ago -- thanks to the "bear sightings maps" the North Shore News used to publish. It was bad news back then. It is worse news now, with our very habituated bears on the prowl. A habituated bear is a dangerous bear. No longer can we ignore these once shy and reclusive "docile" black bears in our midst. No longer can we continue to coddle the mountain bike freeride without proper containment, management and enforcement.

The bear - a healthy, four-year-old male - was highly determined, according to conservation officer Kent Popjes.

"It broke open a deadbolted door on a garage. It ripped it right off its hinges, entered the garage and opened a freezer up and got some food out," Popjes said.

Popjes waited at the scene, knowing the bear would have to be killed.

"We've had a number of reports in that area of bears trying to break into garages and vehicles," he said. "It had done property damage and was quite a safety risk at that stage for re-entering buildings, possibly homes. There wasn't a lot of options. It wasn't a good candidate for relocation. ... There's a 99-per-cent chance if we move this bear, it's going to come back and repeat this behaviour."

A 93-year-old Delbrook woman has been stitched up and a 190-kilogram bear has been shot after the two had an unexpected run-in Tuesday afternoon.

The adult male bear apparently let himself in through the open back door of the home on the 600-block of St. Ives Crescent and began rummaging through the fridge.

The woman noticed the fridge open and put her hand on the door to close it, not knowing what was on the other side. The startled bear put his paw over her hand. In her own shock, the woman pulled her hand away causing a gash that required stitches to close.

"We're fortunate she only received those injuries. That bear could have caused some serious or fatal injuries," said Sgt. Todd Hunter, conservation officer.

It just isn't going to get any better until our politicians, public land managers, and the North Shore Black Bear Society pull their "heads out of the sand" and start to address the core problem of our growing "Bear problem".  Bandaid solutions no longer work, and are very unfair to the bears and the residents affected! So, please "bear" with us as we try to connect the dots for you...

Causes and symptoms of bear-human conflict

Distinguishing between causes and symptoms

In a review of literature pertaining to bear-human conflict, Heuer emphasizes the distinction between the causes and symptoms of conflict. Development in and recreational use of bear habitat are the causes, and un-natural bear behaviours – namely human habituation and human food-conditioning and habituation – are the symptoms. (Heuer 1993) Misunderstanding of bear behaviour and biology, and the lack of tolerance often exhibited by humans towards bears, may also be considered causes of conflict. (British Columbia Conservation Foundation 2000)

Bear researcher Dr. Steven Herrero provides the following description of human habituation and human food-conditioning in bears, and the circumstances that lead to these behaviours:

“If a bear regularly encounters quite a few people, but doesn’t get food from them and isn’t harmed, it simply gets used to people, will tolerate them at closer distances than before, and sometimes ignores them. Such a bear is habituated to people…

A habituated bear that also eats people’s food and garbage behaves differently than a bear that is only habituated. Such a bear forms a simple association –‘people’ may be followed by ‘food’. I refer to a bear with this expectation as being ‘food-conditioned’.” 2

WHAT ARE THE RISKS TO PEOPLE AND BEARS?

Human habituated and human food-conditioned bears are more likely to come into conflict with people due to their increased proximity to, and associated lack of wariness around, people. Such bears are therefore at greater risk of removal or being killed as “problem wildlife”. They also have an increased vulnerability to hunters, poachers and to becoming road-kill. (Herrero 1985)

Human habituated bears and human food-conditioned bears have the potential to be especially dangerous to humans because:

they are willing to be in close proximity to people, and in the case of food-conditioned bears, they may become bold in their attempts to secure food from people.

people may mistakenly presume such bears to be “tame” and behave inappropriately around them.

Treating the causes of bear-human conflict

Given that development and recreational use in bear habitat have been identified as the causes of bear-human conflict, preventing and/or reducing conflict necessarily means managing human activity and behaviour. (Heuer 1993)

For example, the rate of serious/fatal injuries inflicted by bears on humans in the Canadian National Parks in Alberta declined with the implementation of careful food and garbage management in the mid-1980s. Most incidents between the 1950s and early 1980’s involved habituated and food-conditioned bears. (Herrero and Higgins In Press B)

Other means of managing human activity and behaviour include: seasonally restricting access into bear habitat, educating people who live, work and recreate in bear habitat as to correct behaviours and practices, and locating trails and facilities away from important bear areas.

So what are we waiting for, people? Our authorities need to deal with the core problem, which is the present mountain biking status quo on our North Shore.  Speak up! Speak out! Something has got to give!