It is Election Time again for municipalities in BC…

Some pre-election glad handing going on…

Quote from a mountain biker on FB about the following photo op:

Sebastian M F: “Amazing to see the increased interest in the mountain bike community and the NSMBA - North Shore Mountain Bike Association's endless efforts to show we are everything but a bunch of "nature terrorists" - I am proud to be a part of this!” 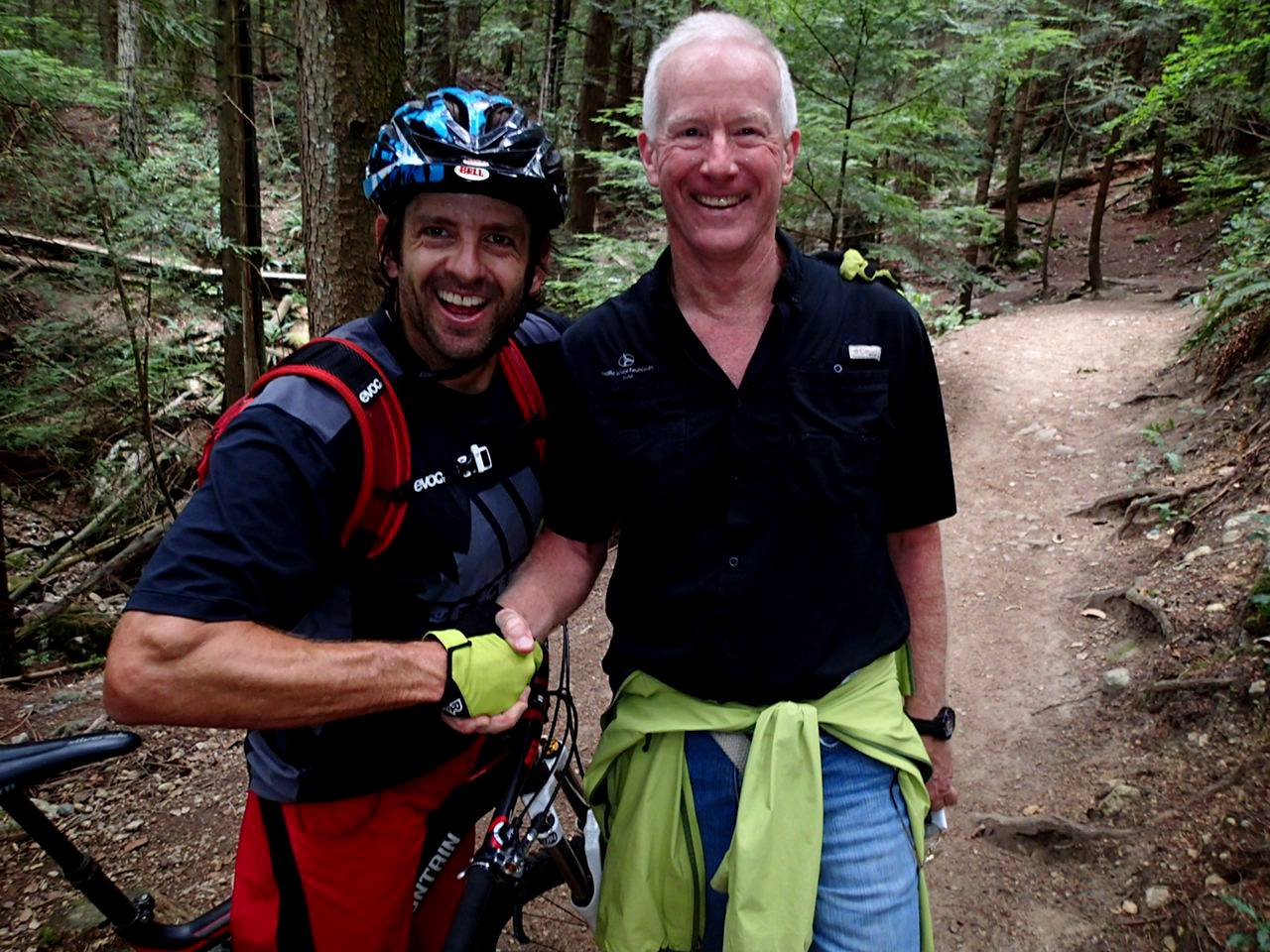 The NSMBA has simply been given the “keys” to our public forests because of Mayor Walton’s longtime, ongoing love affair with destructive, indiscriminate mountain “dirt” biking inside our forests, four seasons a year, rain or shine, day and at night. It is by no merit of the NSMBA, themselves. Remember, mountain bikers had snuck in through the back door to ride and build, without permission (illegally, unsanctioned, unauthorized) Now they are rewarded for their scofflaw behavior, which continues to this very day.

Richard Walton, Mayor of the District of North Vancouver, handed over the official proclamation declaring that the “World Mountain Bike Conference on Sustainability”, previously held in Canada, will be hosted by Scotland from 12 -15 May 2009.

The Mayor visited Dumfries to formally hand the framed proclamation to the Convenor of Dumfries & Galloway Council, Patsy Gilroy, who accepted it on behalf of the host partners.

Richard Walton explained; ”My wife and I were inspired to start the Conference five years ago when there was increasing conflict in Canada between the biking fraternity(?), residents and the environmental community. Bikers build wonderful trails benefiting them as users, while wreaking havoc on narrow, vulnerable walks at the same time. I was a councillor then and with political pressure building from all the parties concerned, it was of paramount importance to bring everyone together to resolve the issues around sustainable practices, environmental and social problems.”

Bill Meadows, of Forestry Commission Scotland - one of the host partners - said:

“Winning the bid to bring the World Conference here to South West Scotland came about through our trails expertise and the famous 7stanes centres, which have put Scotland firmly on the world mountain biking map. We are already a world leader in mountain biking and as we pool our knowledge with other, less experienced countries at the Conference next year, we will all benefit from Canada’s willingness to share best practice.”

Delegates at the Easterbrook Hall Conference next May will hear authorities such as Richard Walton. The audiences will include:

• and mountain bike businesses, anxious to hear the latest thinking and taking opportunities to network.

This is Google's cache of http://www.worldmountainbikeconference.com/conference.asp?page=speakers&bio=richardwalton. (The conference was cancelled for mtbers lack of interest, that year… ) Though, the mountain bike riding “festival” went on as planned….hmmmm?

Richard Walton, his wife, Celeste, and Richard Juryn founded the first World Mountain Conference held in North Vancouver, British Columbia in 2003. The intent was to bring people together to learn from many of the local trail builders, retailers and enthusiasts who helped shape the development and growth of this sport, whose origins were in Marin County California and North Vancouver. Elected Mayor in 2002 with strong support from the local biking community, he encouraged the development of a comprehensive land management plan for the North Shore forested reserves, and has worked with a supportive Council to ensure that mountain biking has a permanent home on the North Shore mountains. Mayor Walton is a former teacher, businessman and chartered accountant with a love for the outdoors. In 200

he was elected Vice Chair of the metropolitan Vancouver region, and serves on the Region's Environment and Park Committee. He is serving as one of the two Canadian directors on the 2009 Dumfries Conference.

An overview of the challenges faced on Vancouver's North Shore, in engaging local residents, riders, media and environmentalists in designing an integrated land management approach. How the politics of mountain biking have evolved within the community and the sport has been embraced as a defining part of local culture. Ideas for engagement and problem solving in an urban/forest interface area, in one of the birthplaces of the sport. North Vancouver’s Fromme and Seymour Mountain areas contain 30 sq.km. of some of the most challenging downhill trails in the world. The area is within four different land management jurisdictions, which work closely together in providing stewardship and setting standards for long-term sustainability.

Discussion of trail development and funding strategies for building and maintaining trails in a suburban wilderness area. Illustrations of how cautious engagement and building of trust between volunteer groups, retailers, local government and individuals can result in successful funding arrangements for long-term sustainable trail development and stewardship. North Vancouver’s mountains have a century old network of trails, many of them now primarily used by the mountain bike community. Funding the work necessary to ensure their safe and sustainable use is a significant cost beyond the reach of local taxpayers, so alternative funding strategies have been developed to address risk management and environmental concerns.

There is very little, if any, care for the natural environment by these Extreme Freeride Mountain Biking “nature terrorists” in our midst. It is all about the cheap thrill of off-road dirt biking! Mechanized or motorized, off-road wreckreationalists are “birds of a feather”. Smooth talking, glad-handing mayors don’t change that fact.

“Mountain bikers only have as much political clout as the politicians and public land managers give them.” 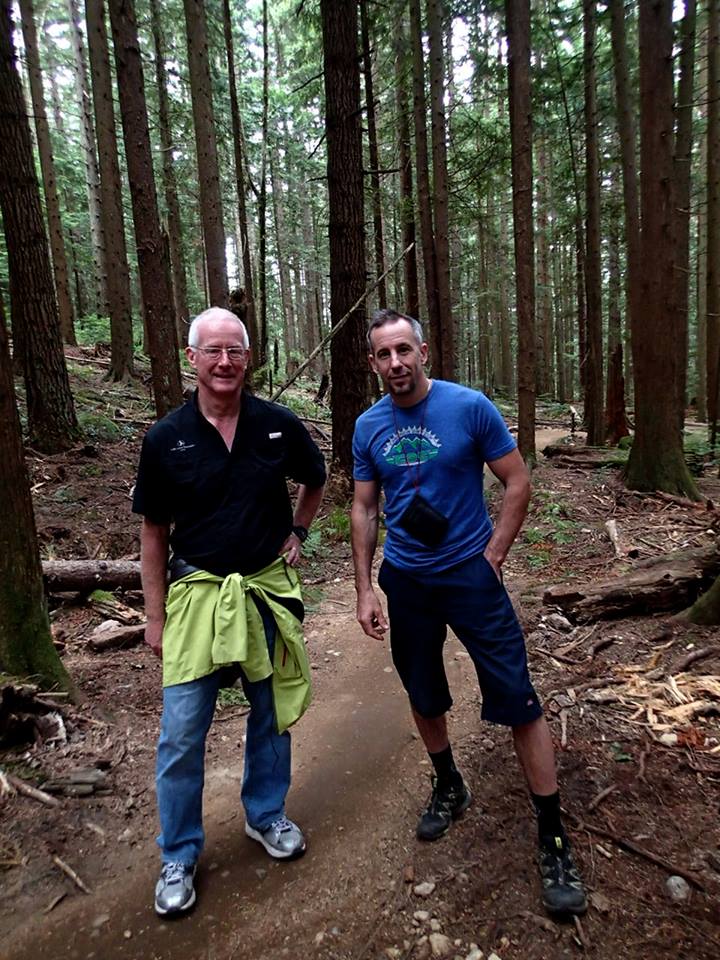 Mayor Walton with NSMBA's paid spokesperson, Mark Wood, looking to do more damage to the forest via MTB Trail Building

Now, you know… (and with barely one-fifth of the voting public coming out on Election Day, selfish interest groups like the NSMBA continue to wield their "political clout") It does not bode well for the ongoing health and viability of our Natural Capital...forests, wetlands, etc.

A damaged ecosystem that provides many services "for free", will become very, very expensive if we need to replace these services (damaged by "nature terrorism") with more ineffective man-made inventions that try to mimic the perfection of nature.